The ascetic, laconic design is emphasized by the clean surfaces of the outer walls and the nature of the material, which naturally ages and does not wear out.
Share: 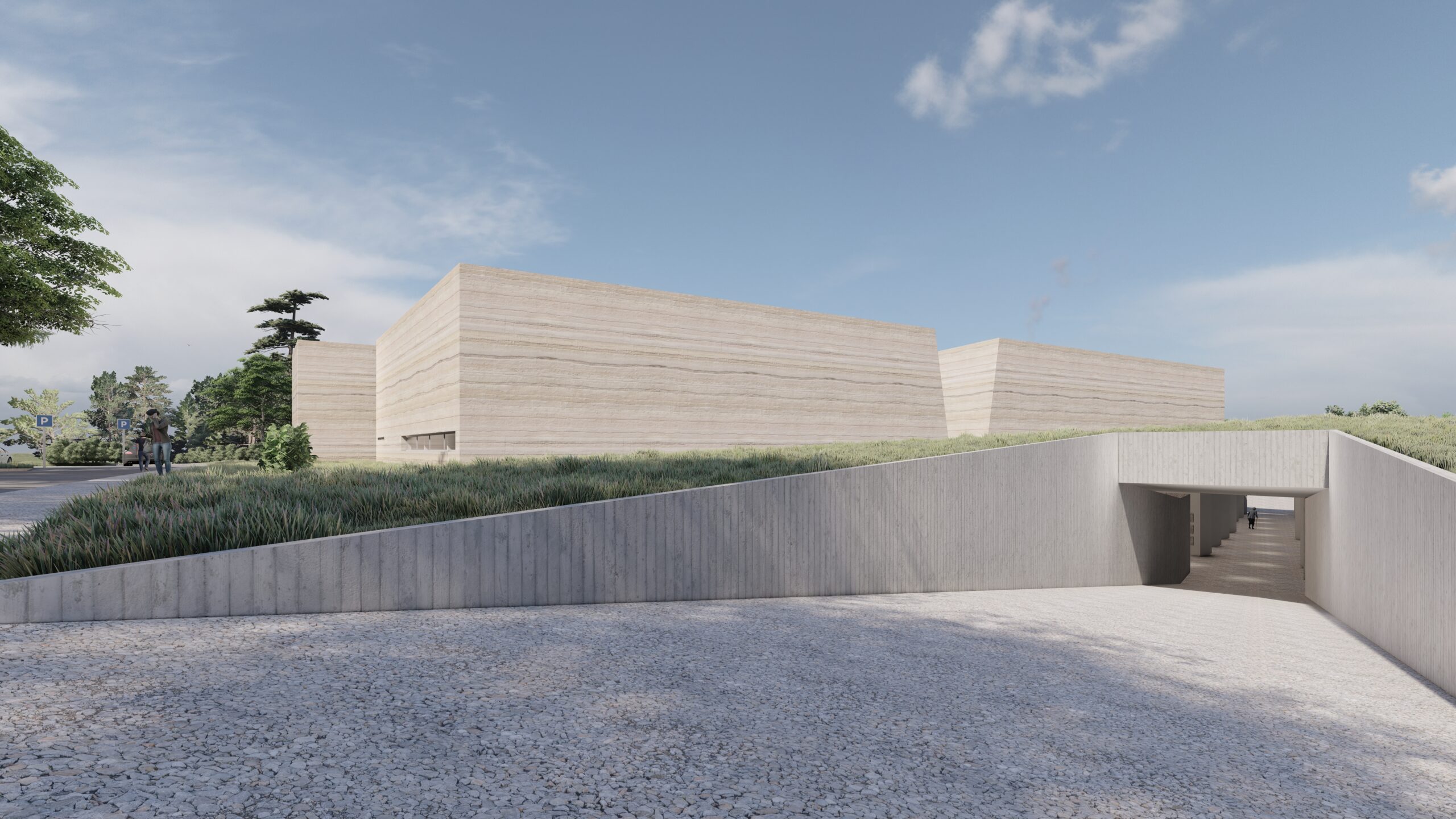 The tranquility of the nearby forest emphasizes the symbolism of this place. Therefore, we aimed to preserve the natural green spaces as much as possible.

A new building should be located at the intersection of the visual continuations of the axes of the existing cemetery and the axis perpendicular to it. It forms a large representative space with respect for the environment, which allows the location of future burials and a columbarium.

With an inner hall and a patio, the volume of the building is clearly divided into three main functional blocks, which are fundamentally different in their functioning. The crematorium is a relatively new building type for Ukrainian society in general. We wanted these functional blocks to be sufficiently demarcated with no cross-flows. 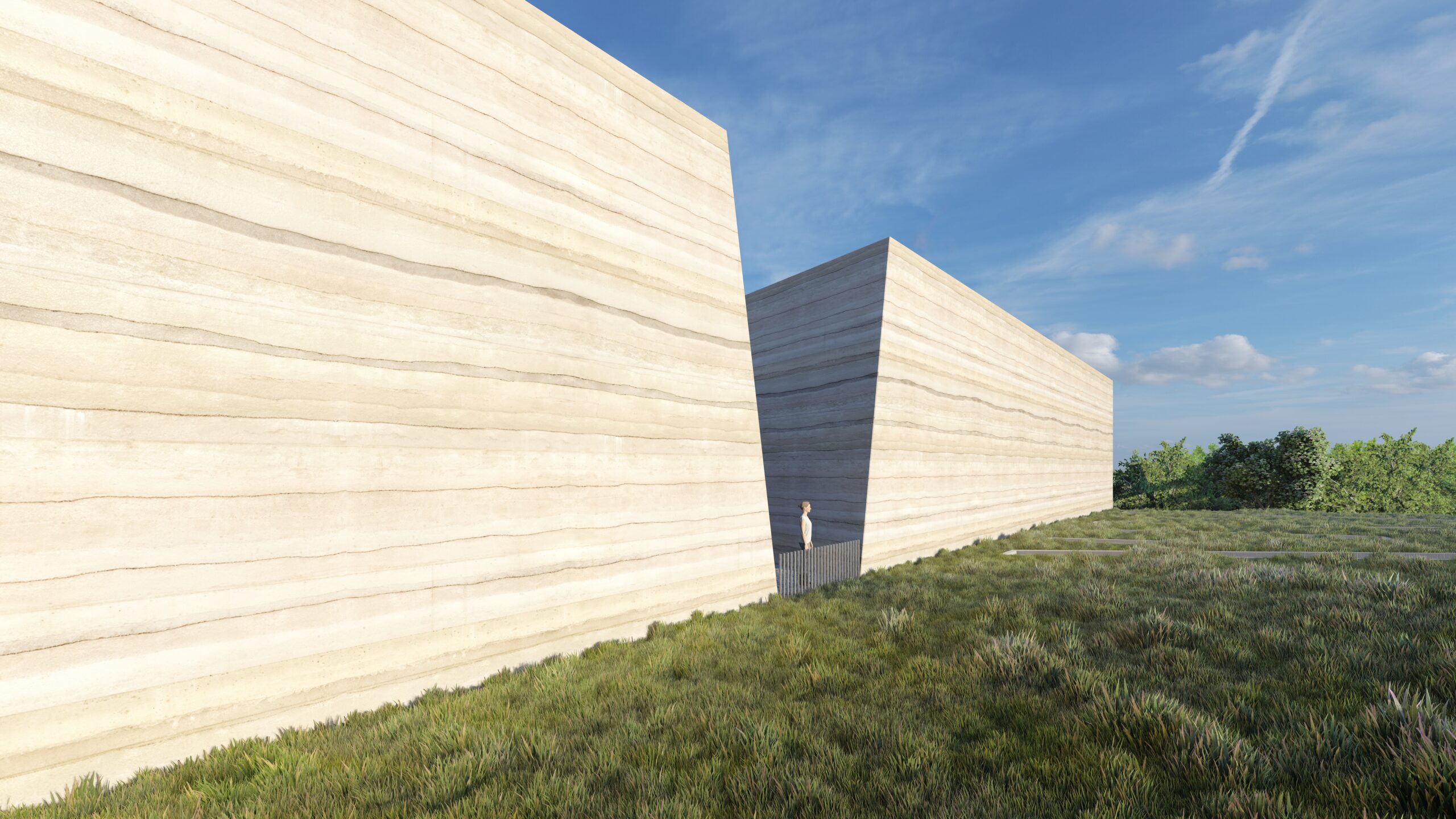 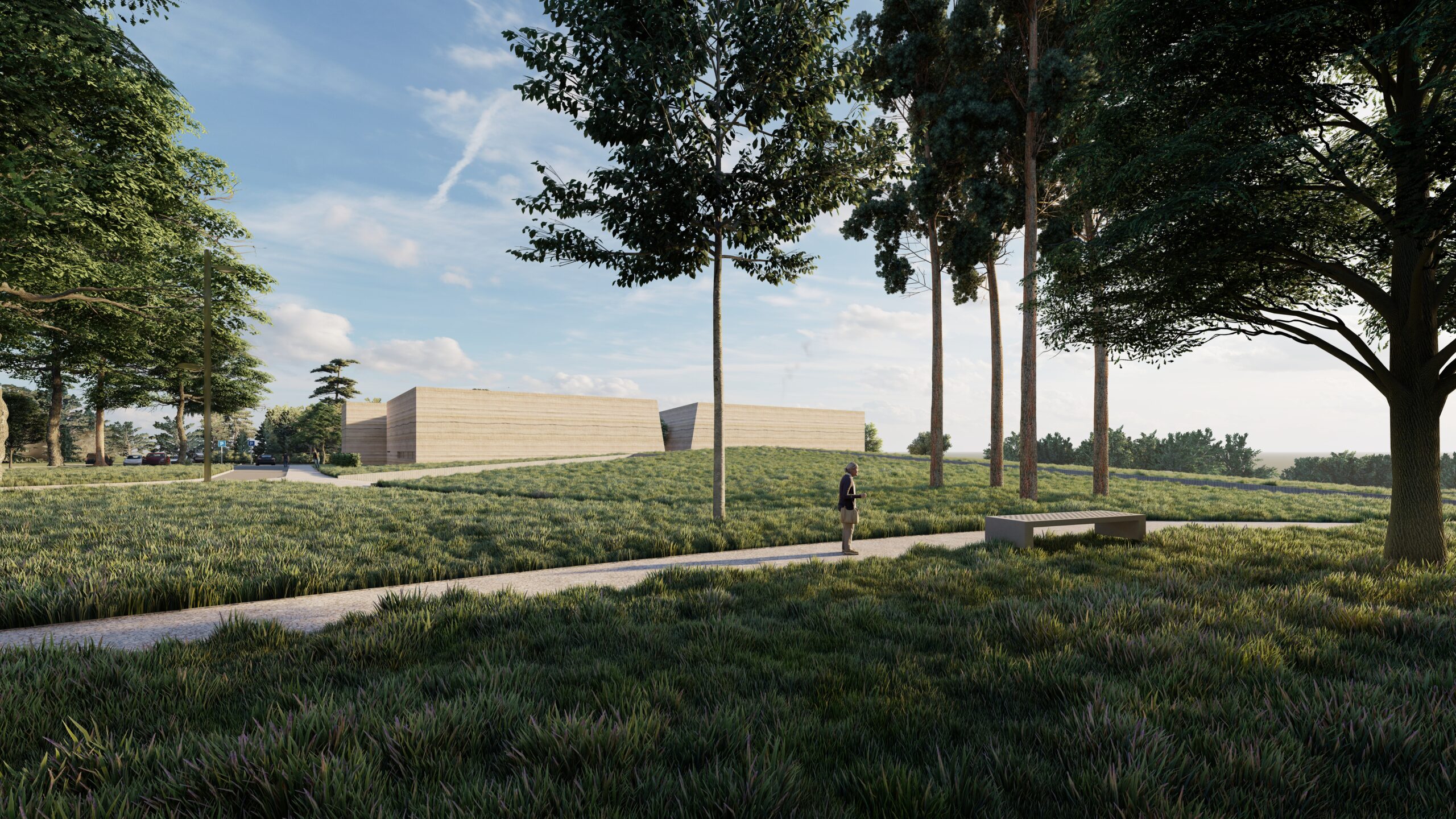 The ascetic, laconic design is emphasized by the external walls’ clean surfaces and the material’s texture, which naturally ages and does not wear out. The intersection of the axes forms a “split”, which creates an entry of space and southern light into the inner semi-patio, where the ceremonial hall and the main hall are oriented. 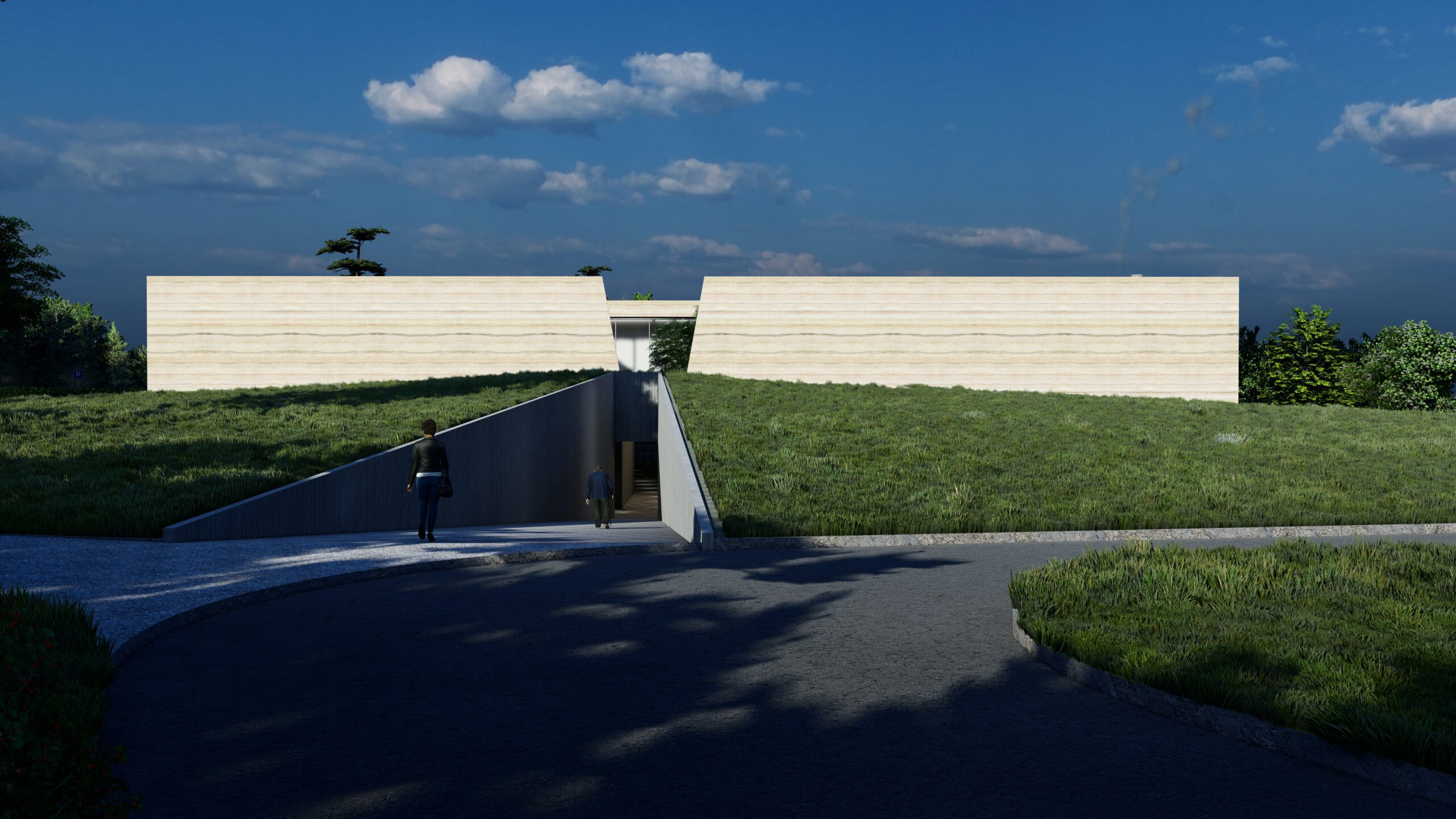 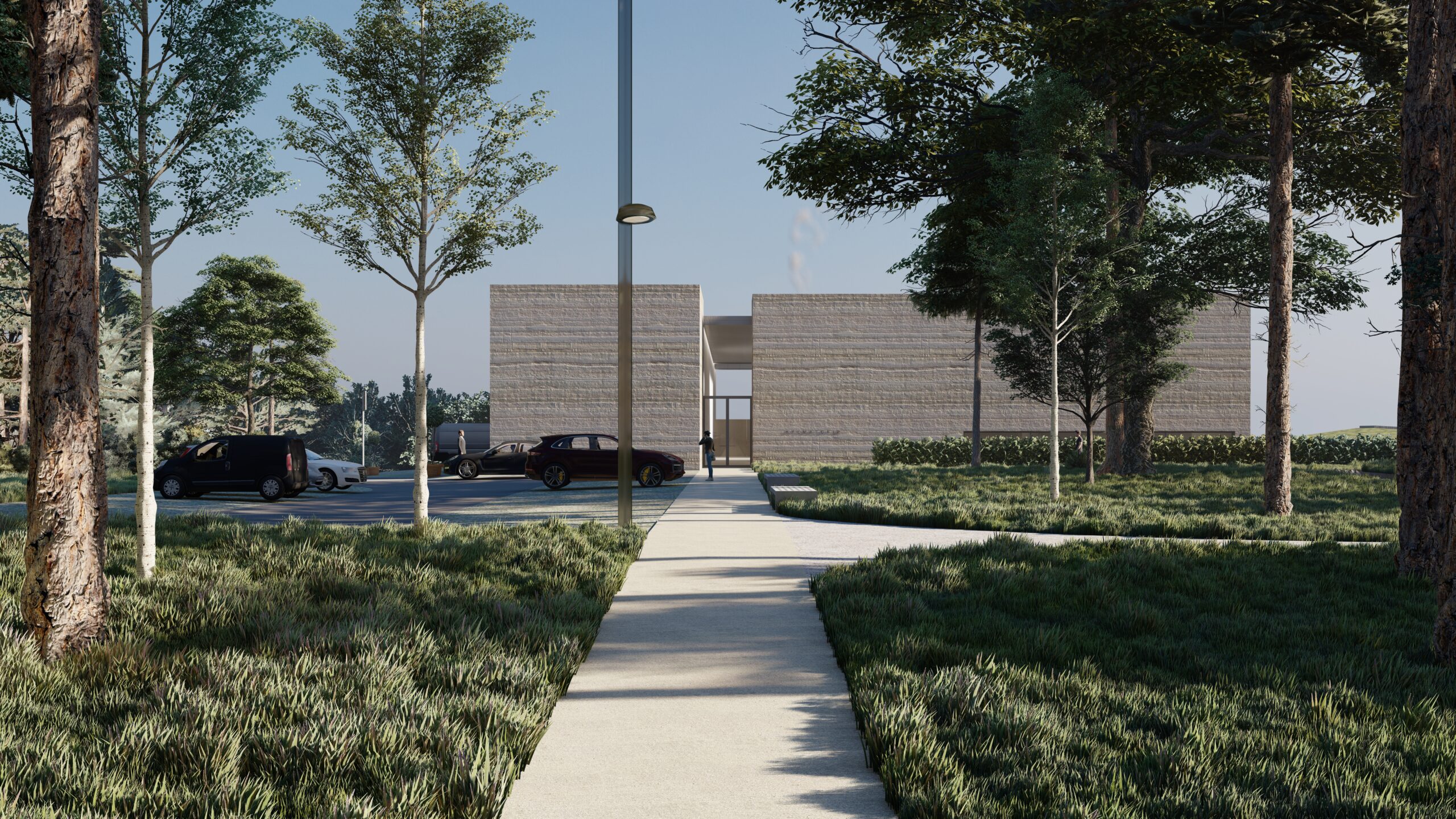 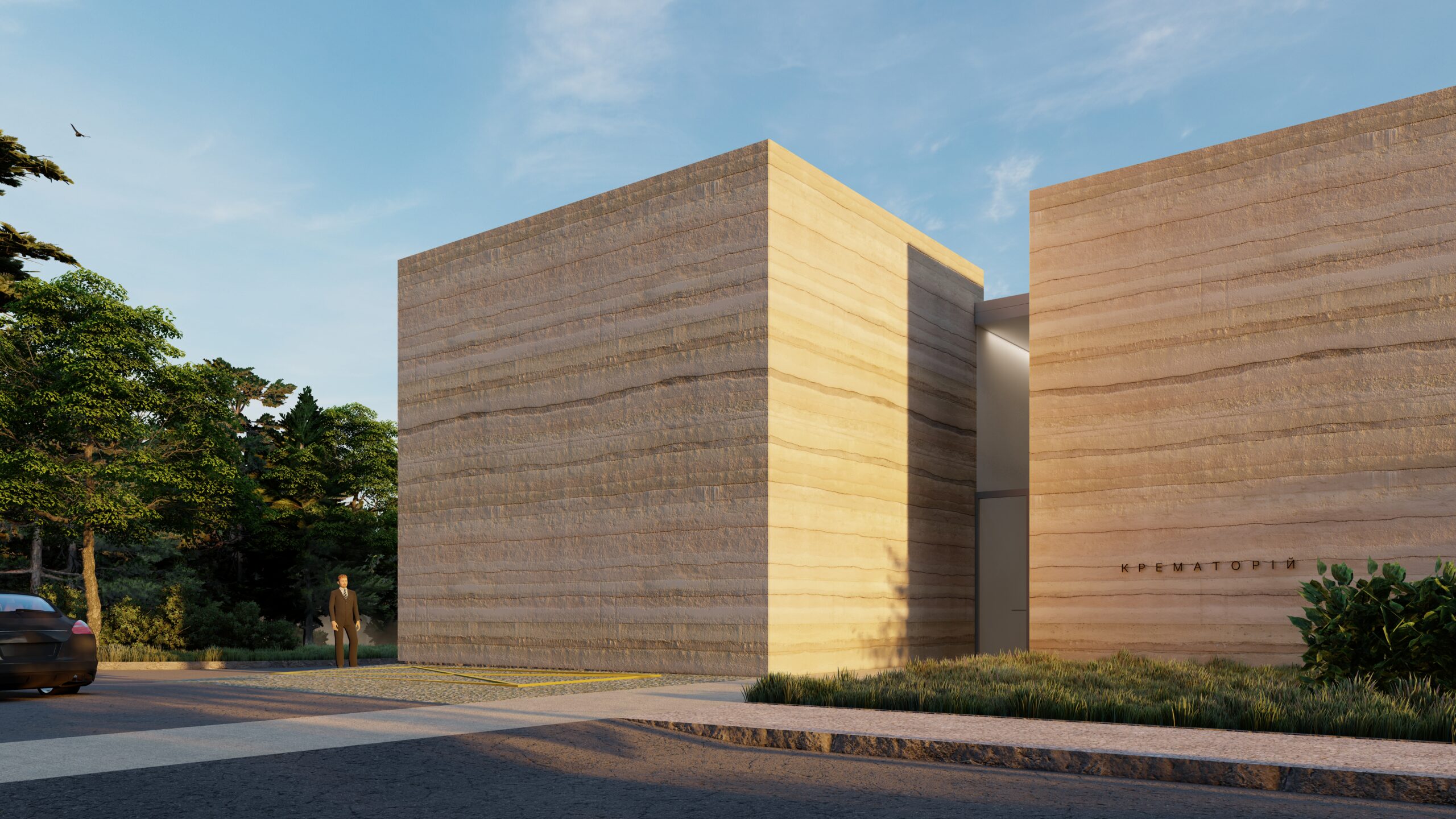 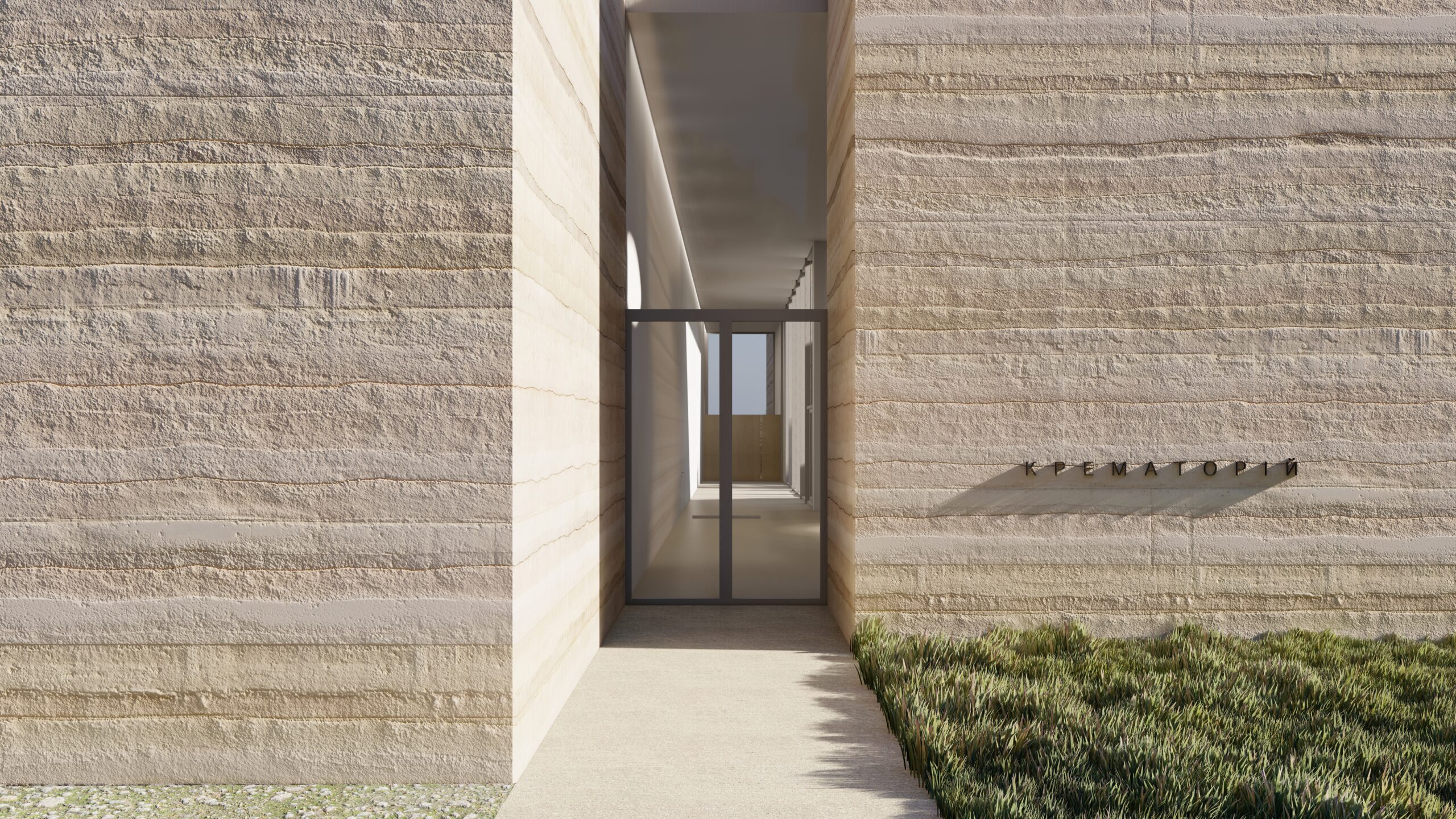 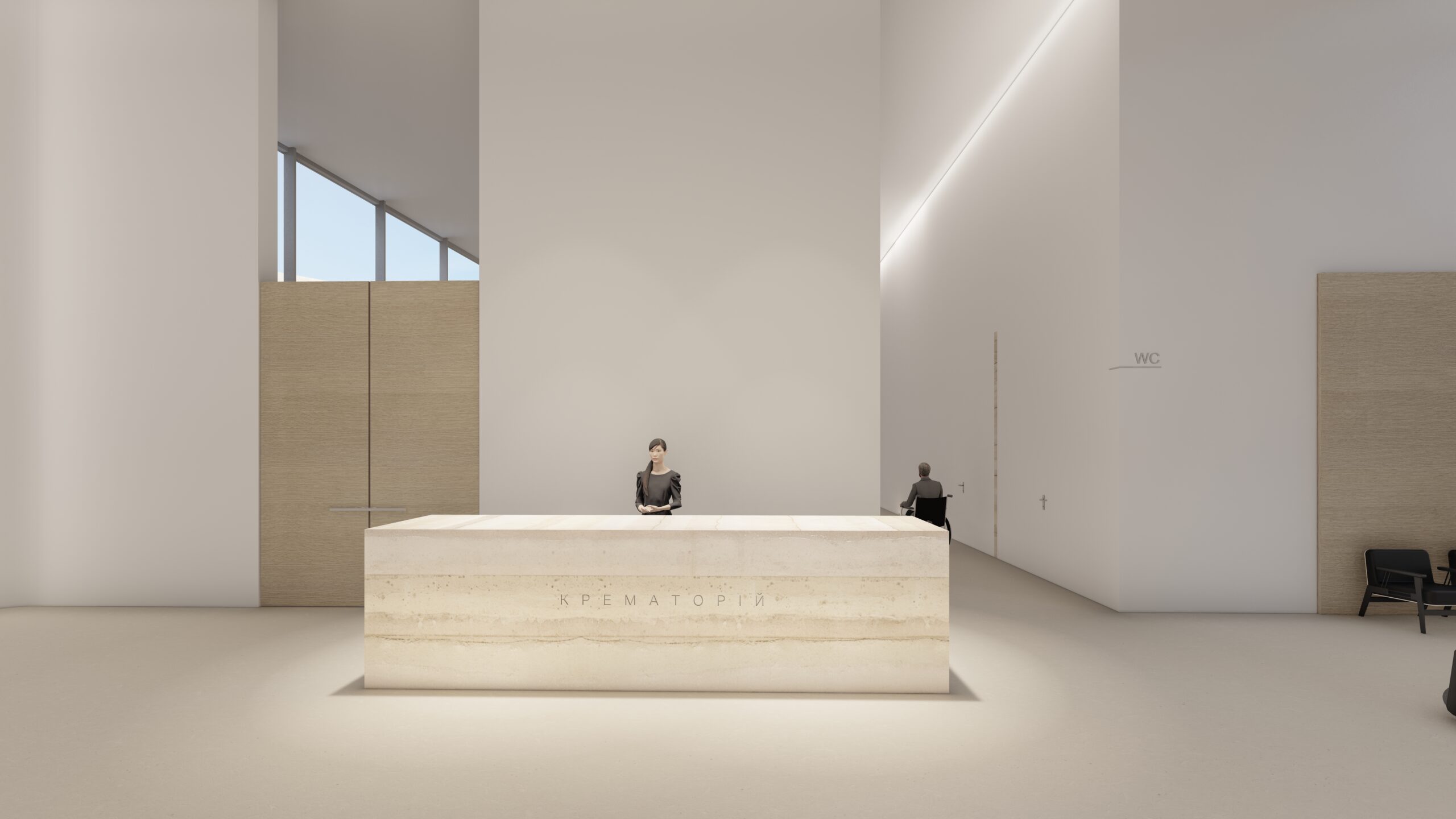 Since all events related to burials and cremations have a negative emotional connotation, we paid special attention to the quality of the interior spaces. Every visit to the Lviv Crematorium should be accompanied by a particular aesthetic pleasure and a high level of comfort. The line of the main hall is a reinterpretation of a person’s lifeline, and the inner patio is a specific reflection of a better, brighter existence. 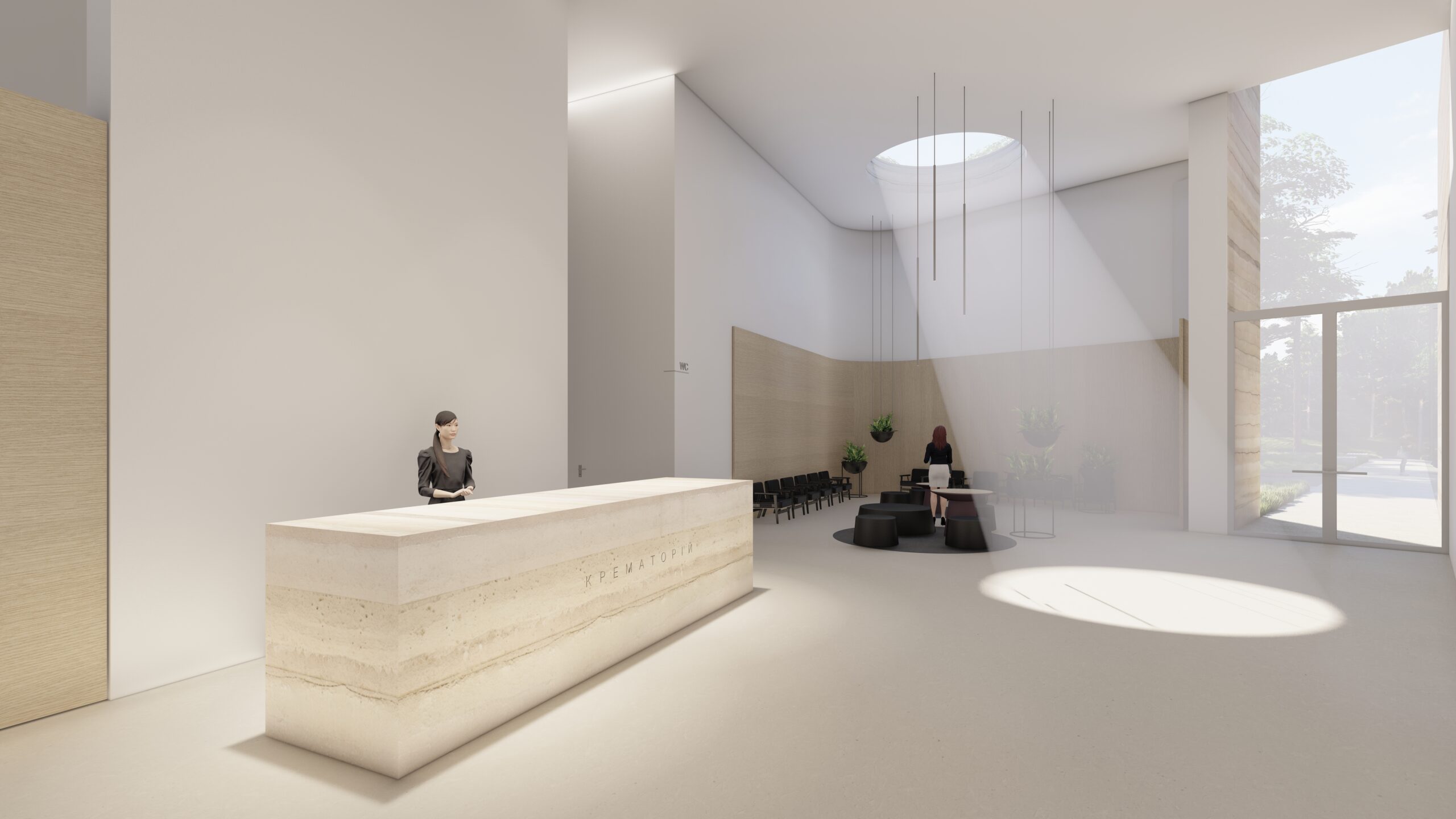 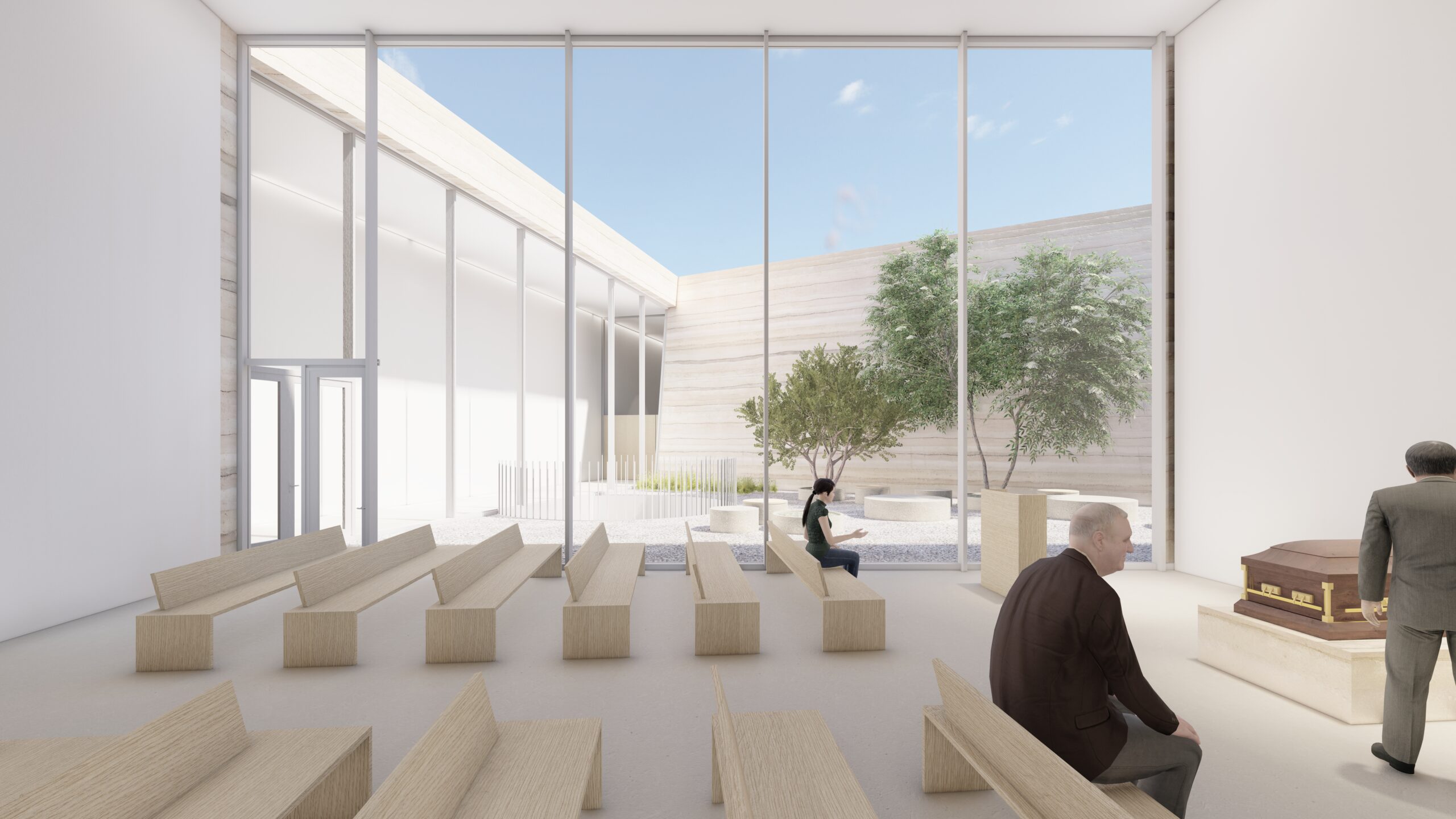 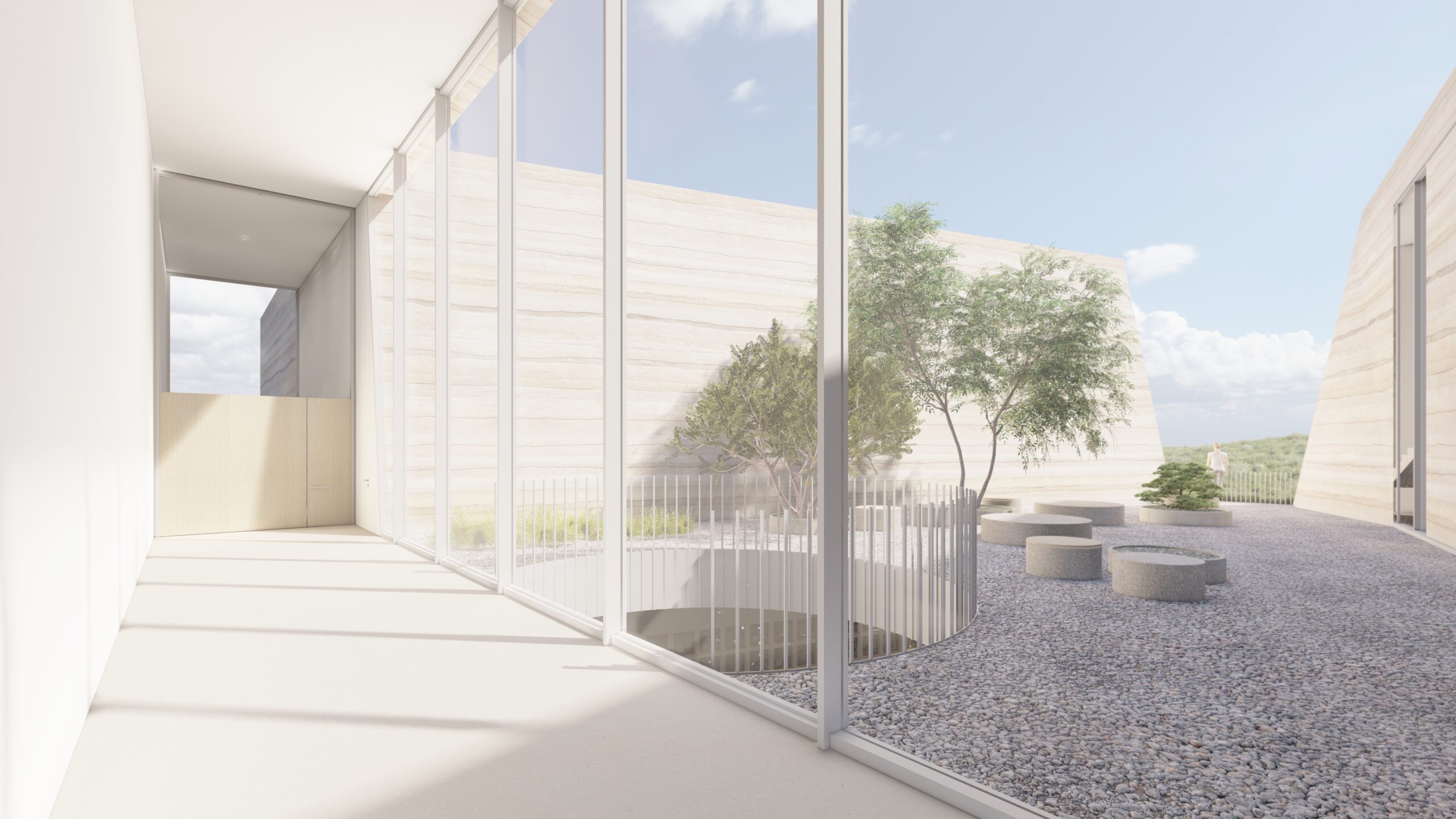 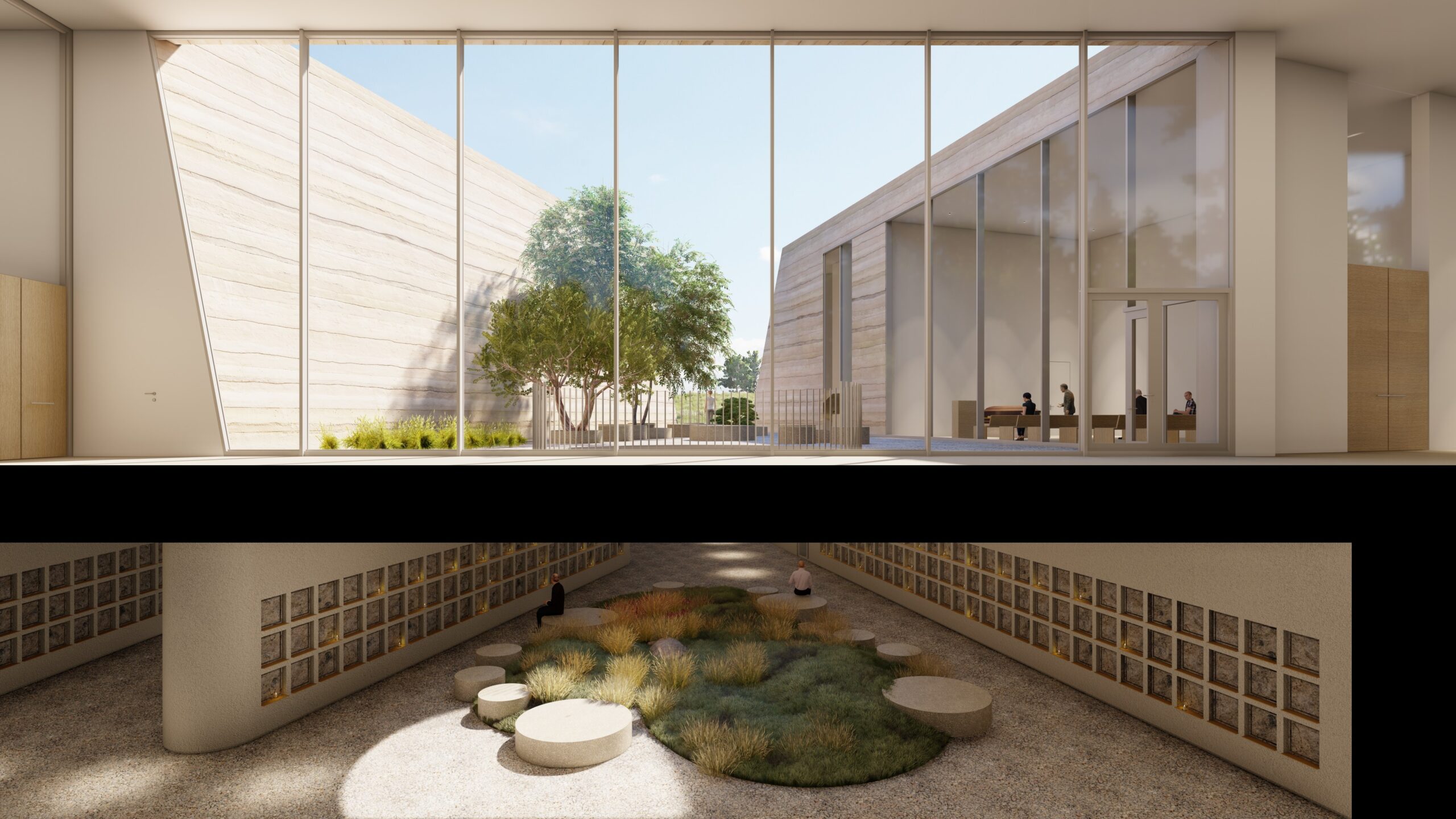 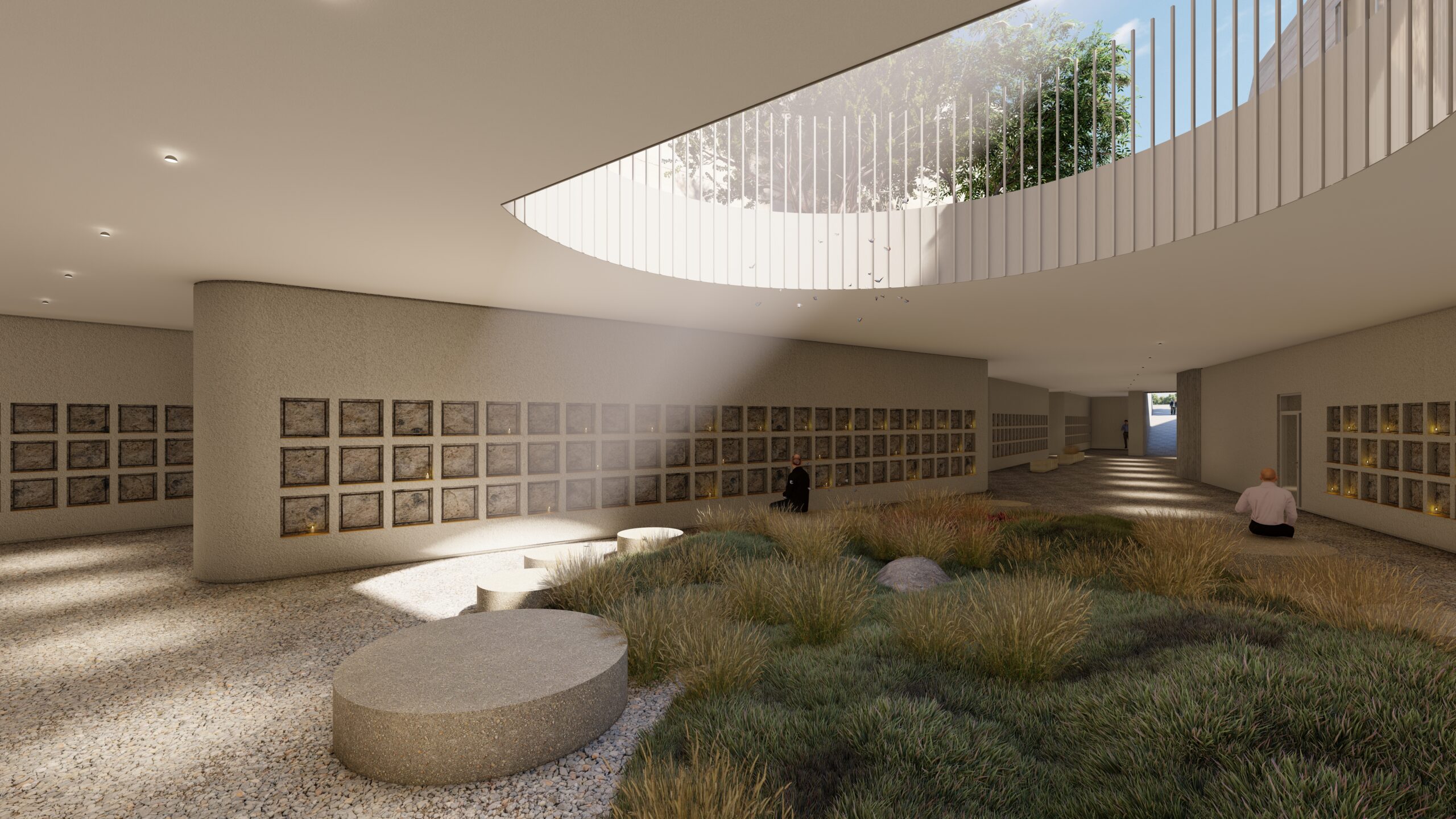 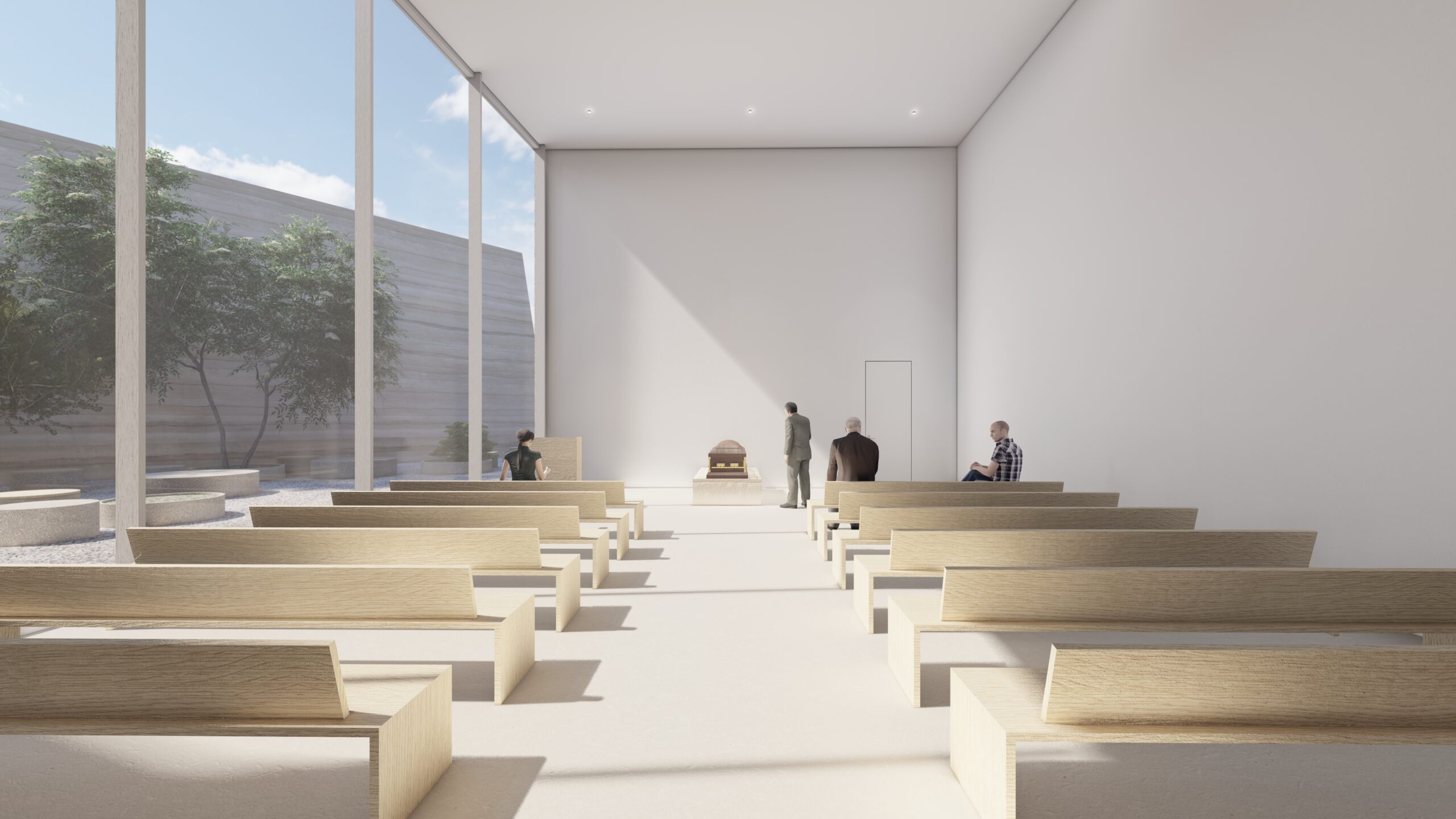 The required capacity of the columbarium cannot be predicted. Therefore, we have foreseen its gradual implementation. The first row of the columbarium, with a capacity of approximately 500 urns, is located immediately under the inner patio. The next stage is a system of semi-underground alleys, which will be implemented at the same level, below ground level, in a large open space on the side of the cemetery. The renderings show only a part of the possible location — with a capacity of up to 2,000 urns. The long sloping alleys of entrances to the columbarium are intended to convey and enhance the effect of the location of the urns below ground level. 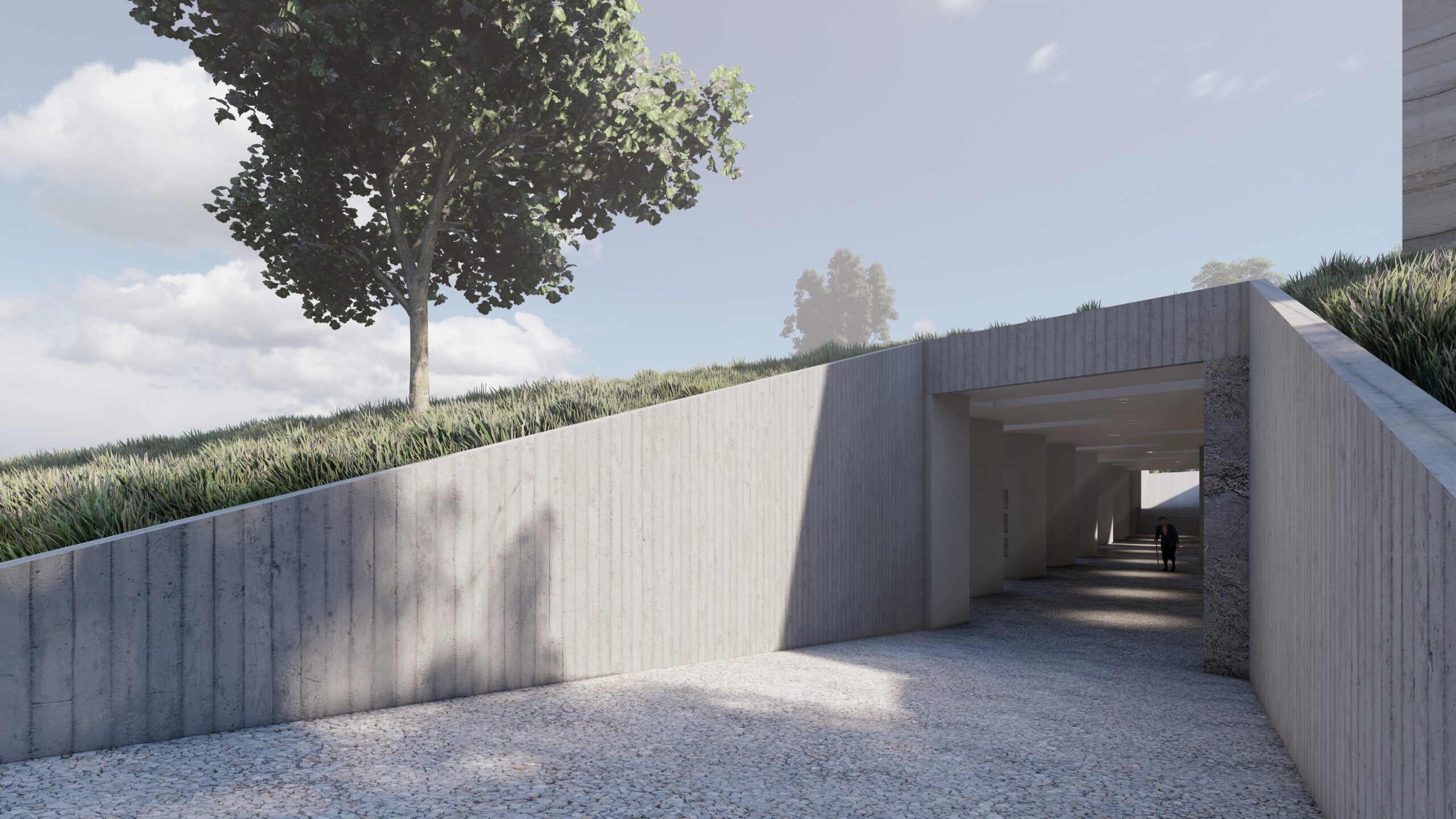 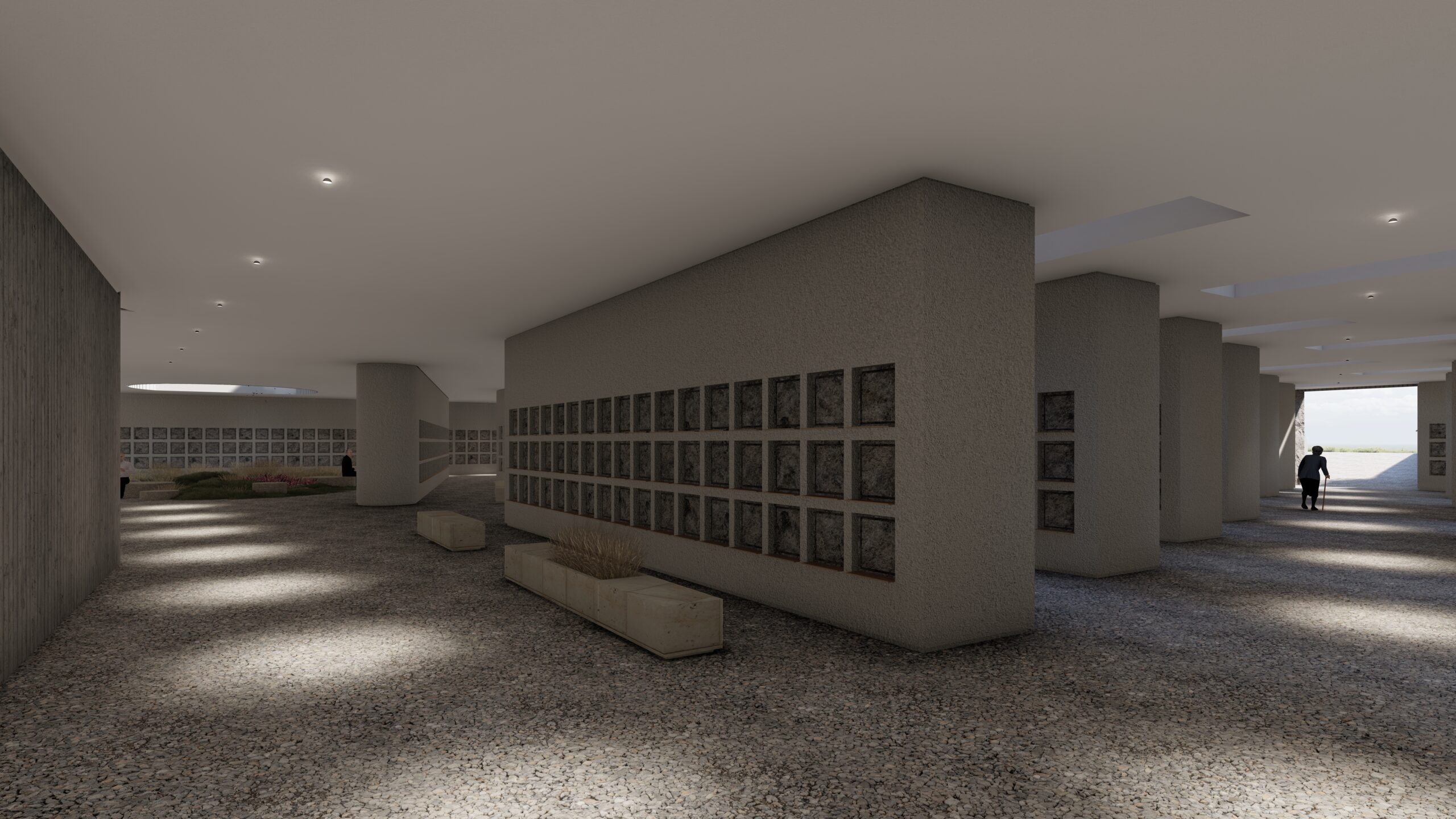 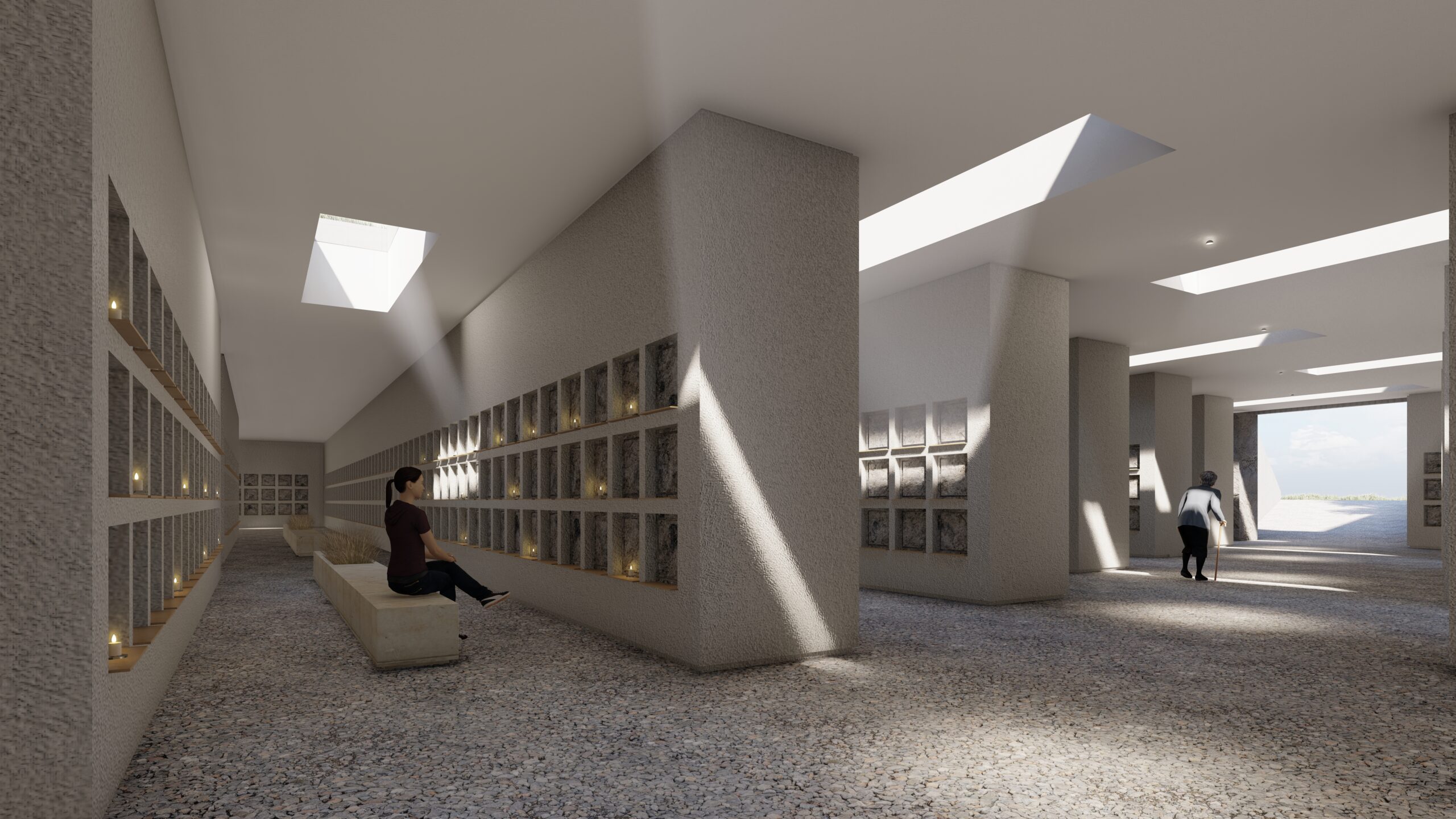 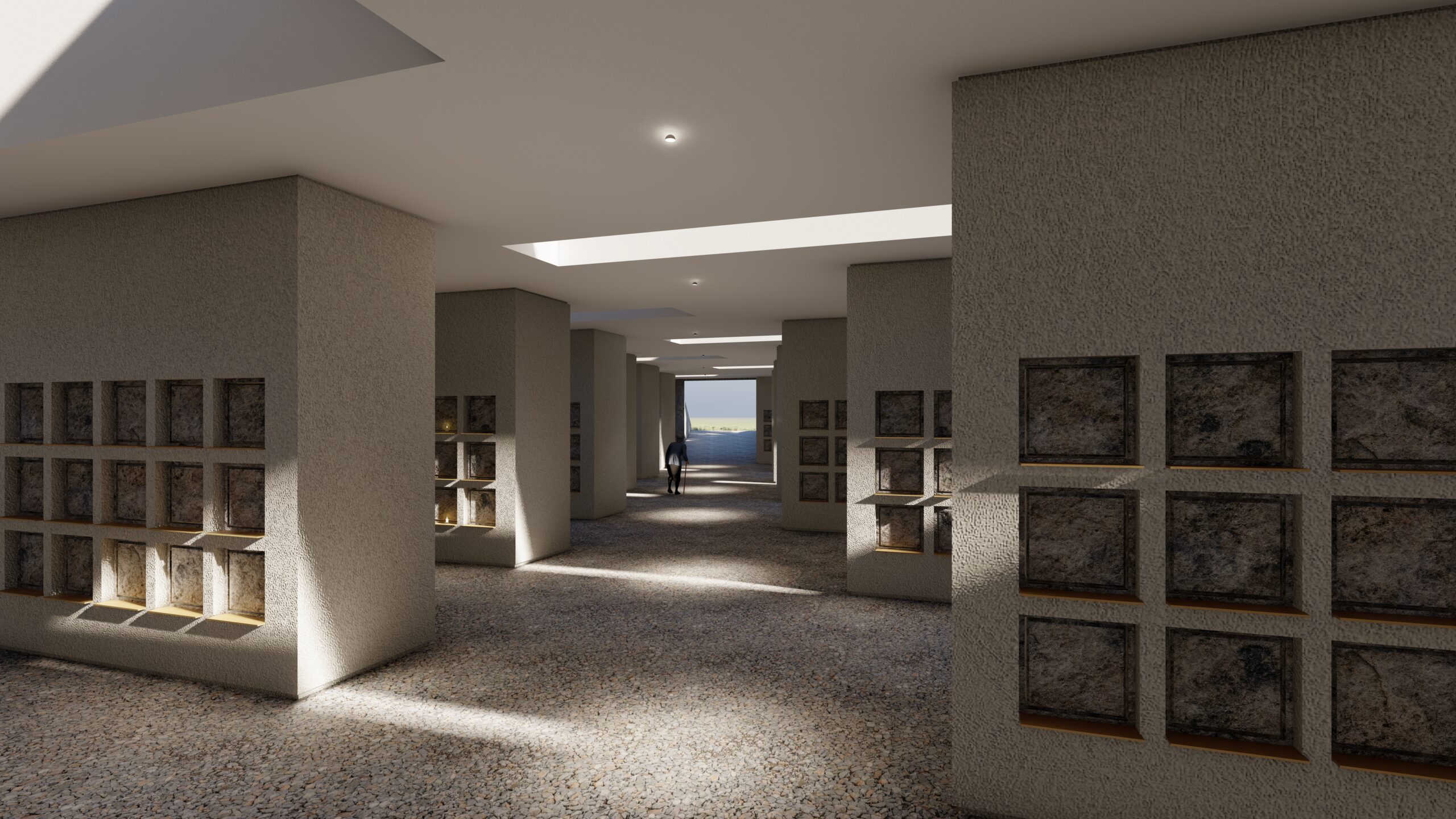 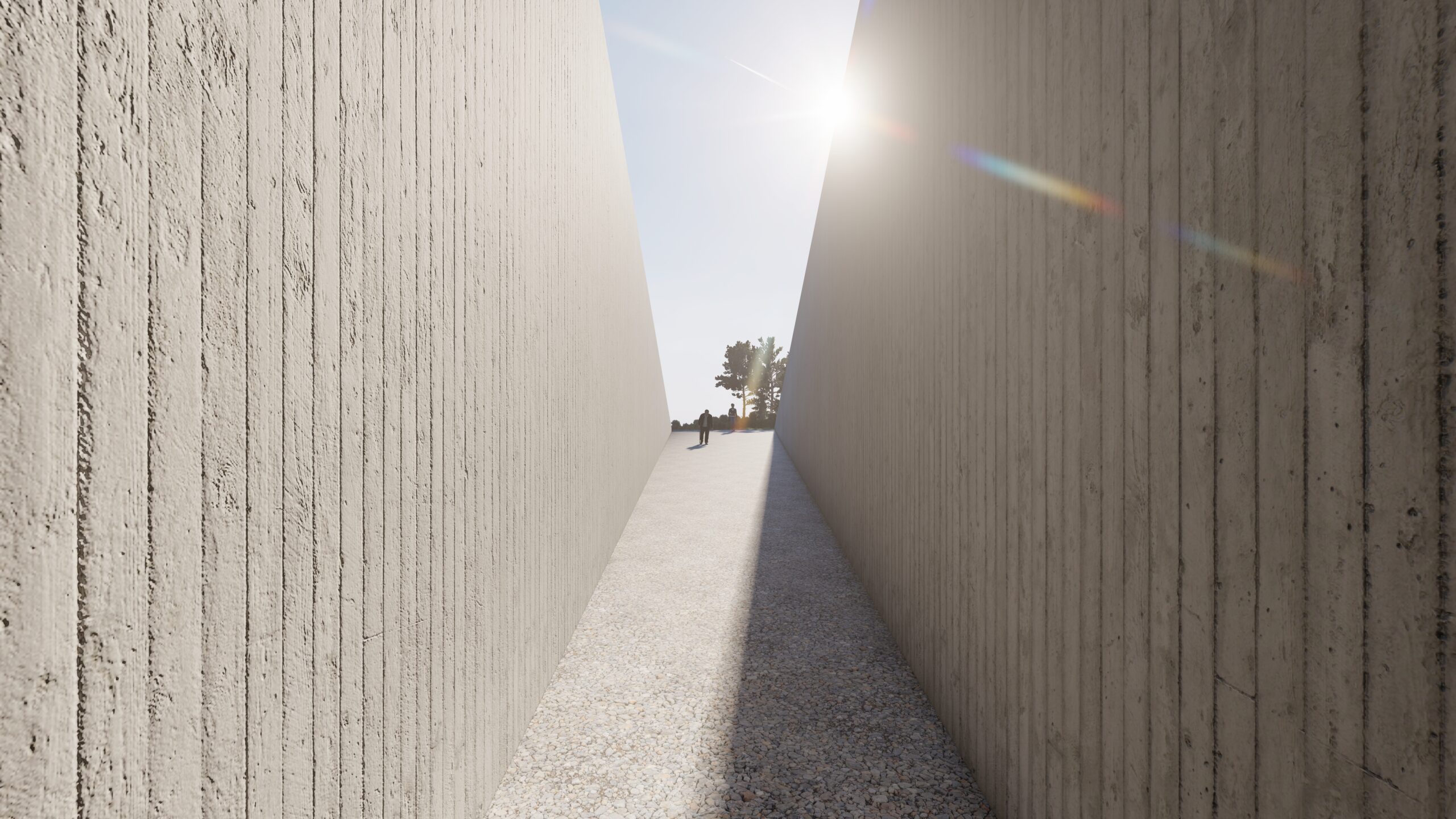 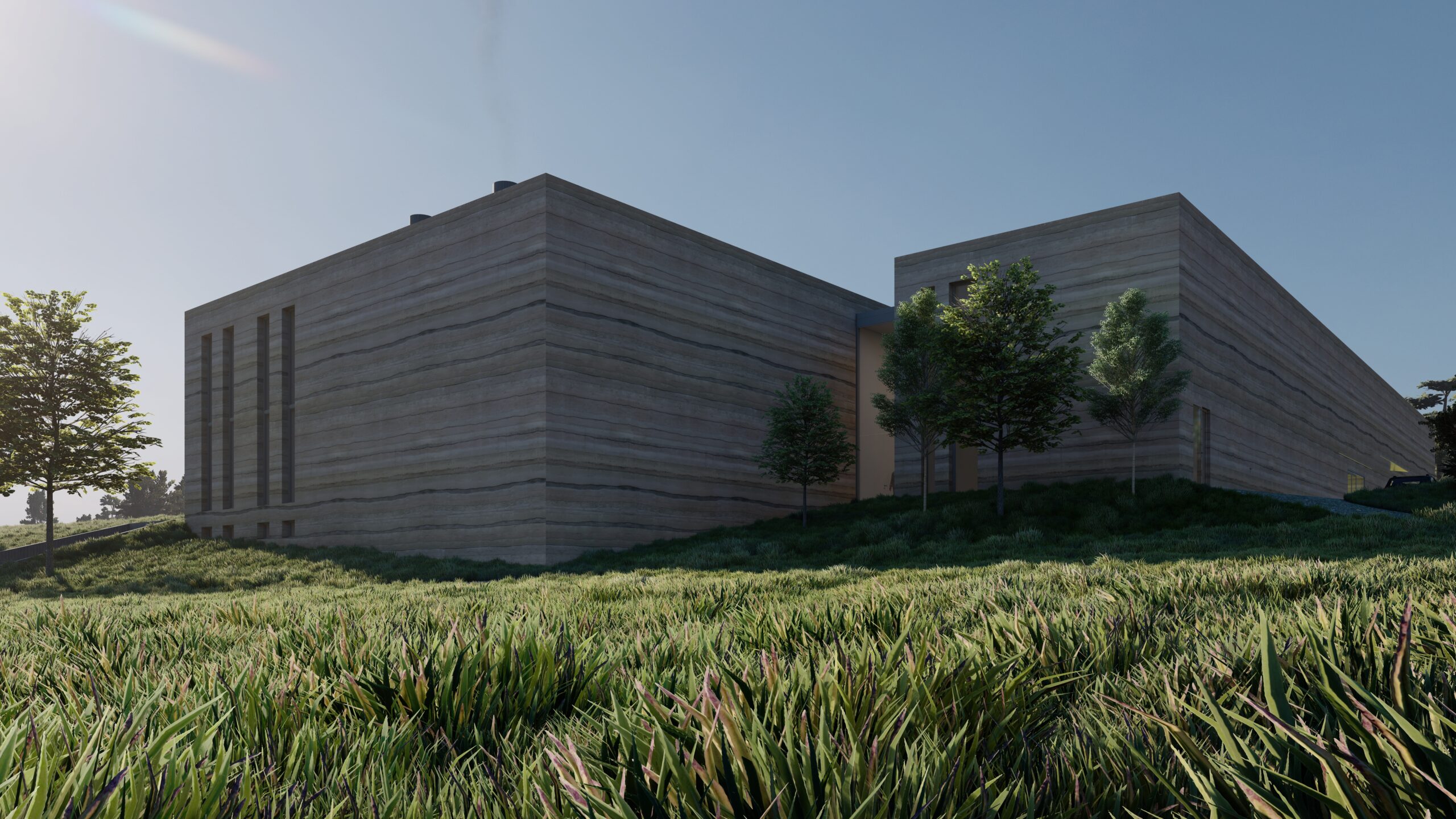 For the construction of the walls, we propose to use the building technology from rammed soil, which is a rethinking of archaic construction methods. Using soil and its visual language can be associated with the oldest types of burial rites of Ukrainians — burial mounds, or with the connection of the ground and the human body in religious aspects, as well as with the close interweaving of the ground in general in Ukrainian culture.

As the basis of the building material, a mixture of soil, clay and gravel of local origin is used, with the addition of a small amount of cement and other stabilizers, which makes it possible to achieve the necessary strength of the structure. The ratio of materials is determined experimentally before the start of construction. Thanks to the layer-by-layer installation in the formwork, a unique texture of the wall surface is formed. To ensure the normative heat transfer resistance of the external walls, the construction is multi-layered — a layer of extruded polystyrene foam is provided between two layers of compacted soil. 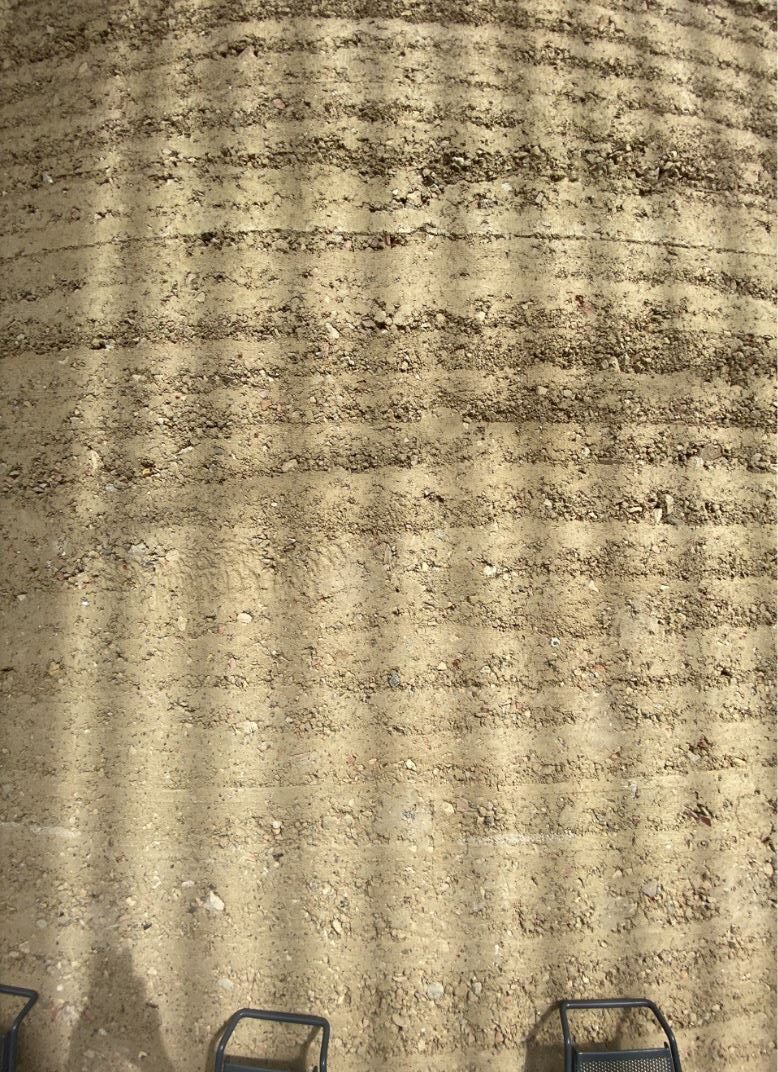 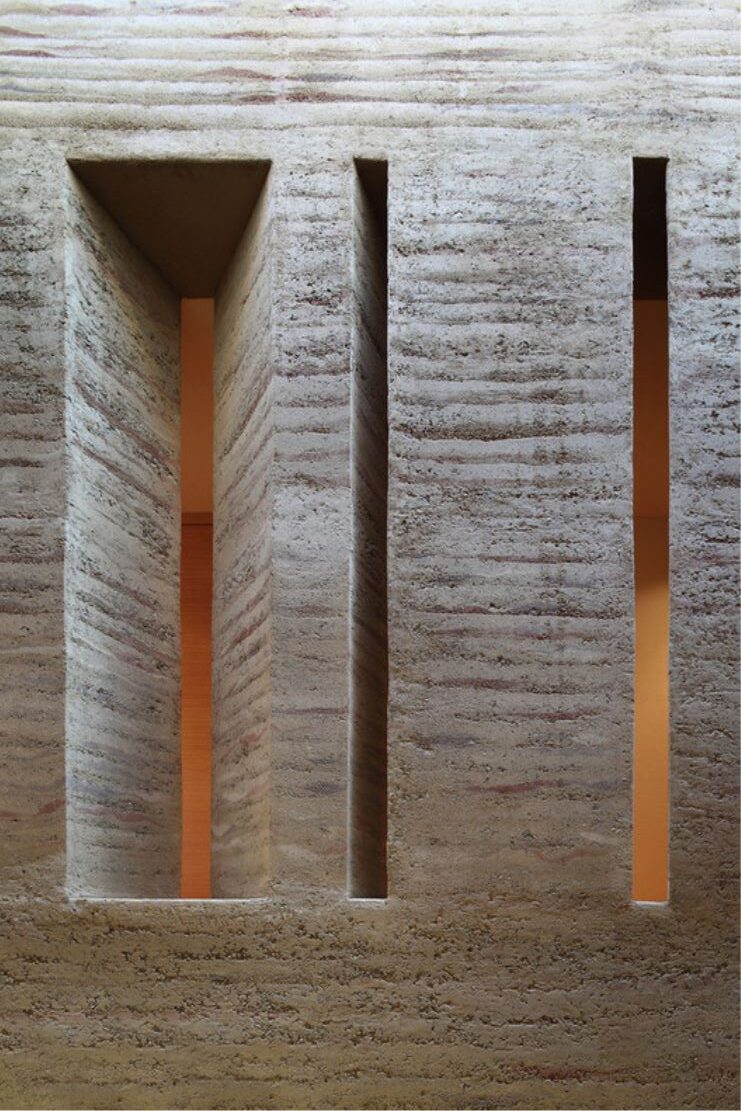 This method is gaining widespread use in modern construction technologies due to its environmental friendliness – in the manufacture of such structures, 50-60% less cement is used compared to traditional monolithic systems, and cement is responsible for 8% of global CO₂  emissions. It also allows you to get unique textures depending on the material used and the method of laying. 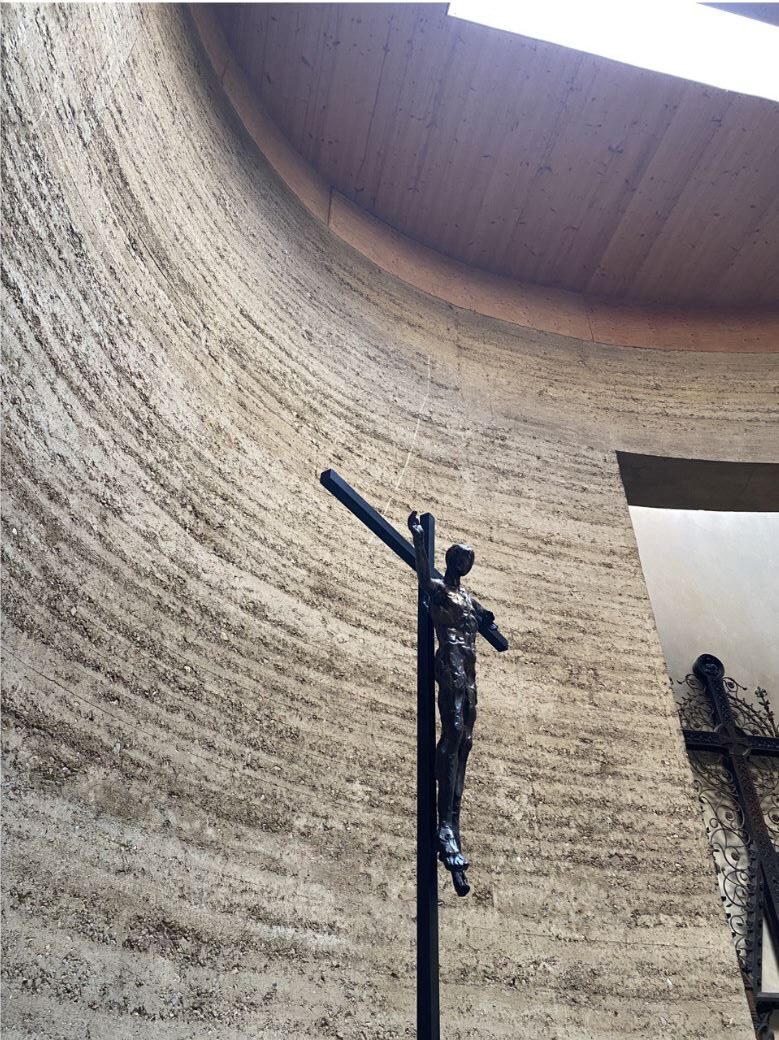 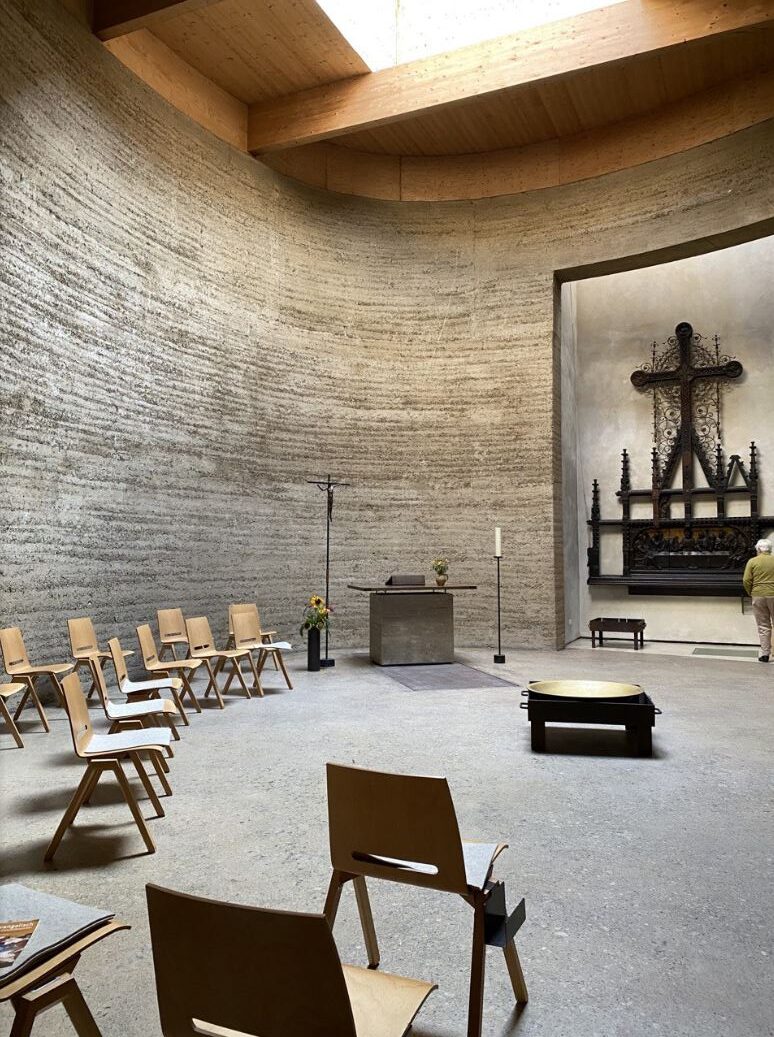 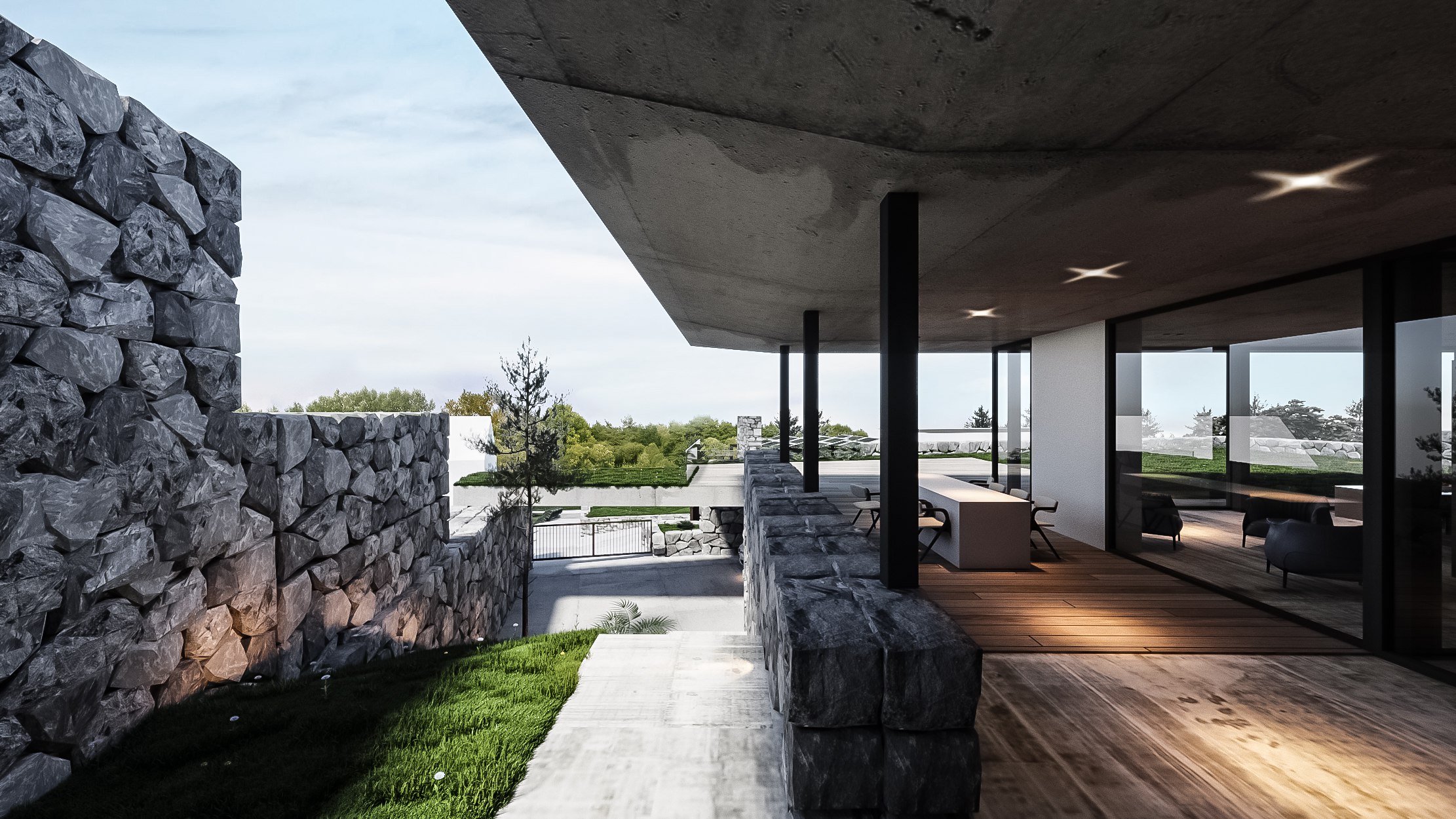 Lorem Ipsum is simply dummy text of the printing and typesetting industry. Lorem Ipsum has been t...